This site needs javascript to be enabled

From the virtual to the real world 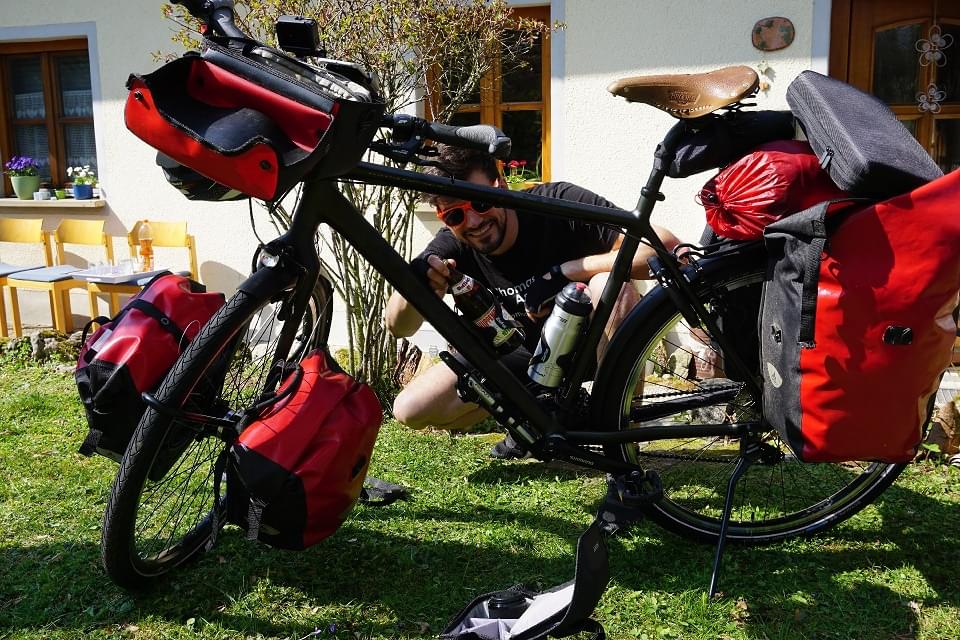 I was born and grew up in a small town in the north of Bavaria, Germany. An environment shaped by beautiful nature, a huge beer culture and catholic traditions. When I was younger, I spent most of the time playing football, making videos or doing computer stuff. Very early I developed a deep passion for technology and I always had the dream of having a big adventure in my life. After finishing school and an apprenticeship as mechatronics engineer at Bosch, I decided to study computer science engineering.

So I left my home town at the age of 18 and moved to Schweinfurt. During my studies I fell in love with programming, where I set my main focus on. I found it very fascinating that you can write some lines of code and the computer or robot starts doing the things you want him to do.

The industry in my home area is mainly about cars or other mechanical parts which did not excite me very much. As a result of my interest in cutting-edge technologies, I moved to Munich for a practical semester at fortiss (a research institute of the Technical University of Munich). At fortiss I started researching human robot interaction and machine learning in a project with a robot bartender.

For my diploma thesis I went to the US. A three month trip which should have a big impact on my further life. It was my first time being far away from home for a longer time. Working with leading experts in the field of Robotics and Computer Vision at the University of Washington in Seattle was an impressive and valuable experience but I also realized how amazing it can be, to be complete on your own somewhere else then your haven of home. The last two weeks of my stay in the US I bought a backpack and traveled along the west cost. A trip I will never forget in my life. I still have to smile if I’m thinking about certain moments. For example waking up in someones apartment where my couchsurfing host dropped me of after partying, stepping outside and looking over San Francisco. One of those moments where I felt true happiness.

After finishing my studies I was thinking about doing a PhD in Computer Vision / Human-Robot-Interaction but discarded the idea after being introduced to Daniel, the founder of a small startup called Innoactive. I quickly decided to start working there (I mean how can you say no to a job where there is FIFA and beer). When I started working for Innoactive in early 2015, there were like 10 employees and the business was mainly focused on Web and App development. But there was also one VR/AR project going on, which I was interested in. Developing the SDK (Software Development Kit) for the Carl Zeiss VR One VR Glasses was one of my first things to do. It was a very interesting and new technology for me.Times at Innoactive started to get really crazy when we wanted to do something innovative for our booth on the Hannover Trade Show, 3 weeks before the event. Back at that time VR glasses were kind of simple compared to the ones which are out there today. Powered by a smartphone which had to be placed inside the headset, those solutions were only able to present a 360° view of the virtual world but no positional tracking. That means you could only look around on a fixed point in the virtual world, but not move. During my time in Seattle I worked with Kinect Sensors (Those 3D Sensors from Microsoft Xbox which can recognize people) and developed software to stream Kinect data between different PCs. Using this solution to stream the data to the smartphones in the VR headset we were able to create a system where people could not only walk around in the virtual world, but also see themselves and others as a virtual avatar. Together with a tower containing a big-ass monitor, which enabled spectators to have a window into the virtual world, the system was pretty cool. 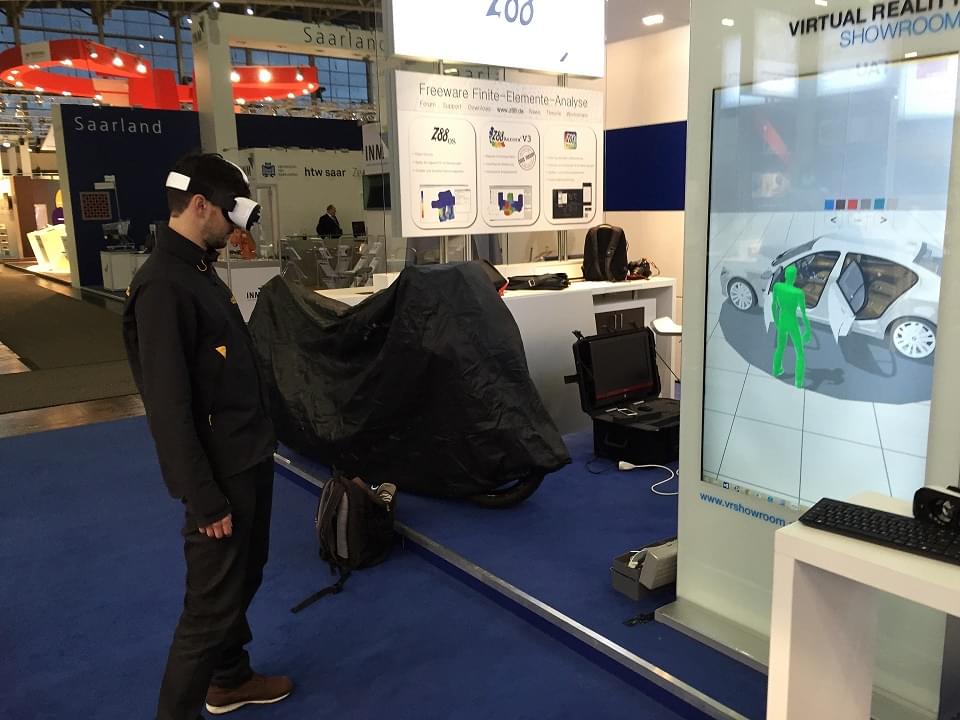 Hacking everything together with my colleague Lukas in under 3 weeks, losing all the code the night before the trade show started and programming it again until 6 AM was quite challenging but the outcome was overwhelming and the start for Innoactive to become a successful Virtual Reality company. In the next two years I worked on several innovative VR/AR projects and traveled quite a lot with work. Some highlights were being part of an accelerate program funded by Boost VC in the silicon valley for 3 months 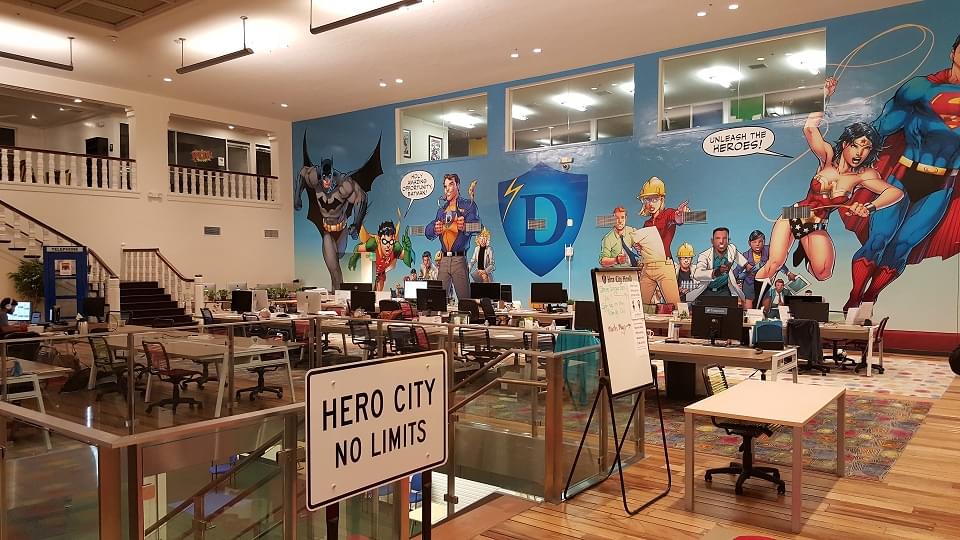 or creating a virtual factory tour with multiple Microsoft Hololens AR glasses for the grand opening of a new Audi factory in Mexico. 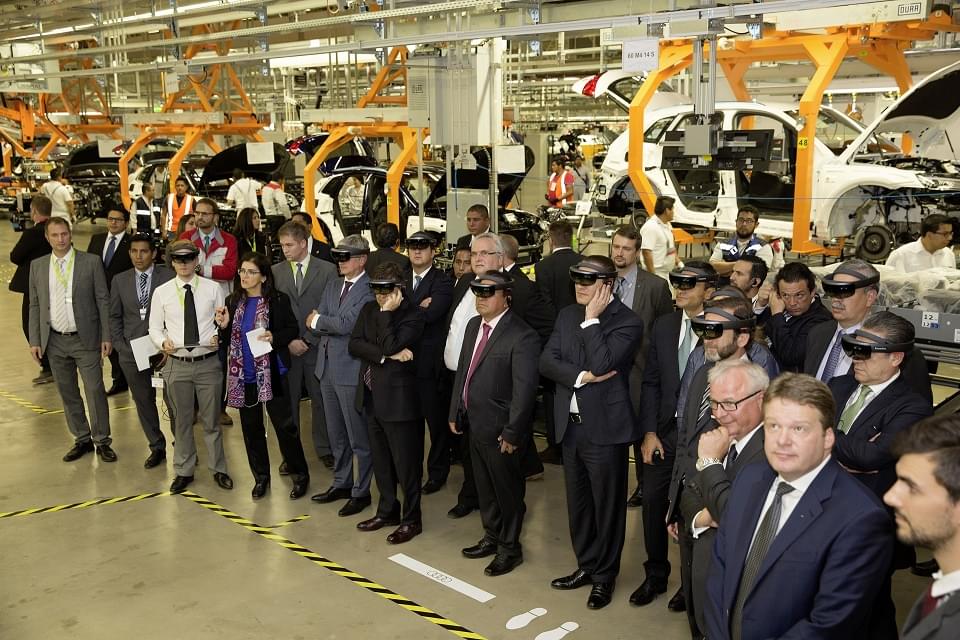 The time at Innoactive was incredible and I learned a lot, both professional and personal. I loved working with such an amazing team and in an environment where work didn’t feel like work, but much more like hanging out with friends and doing stuff together you like. Having a boss who is ready to take risks and invest in something he and the team believes in, was extraordinary. I remember me telling my friends it’s a dream job. 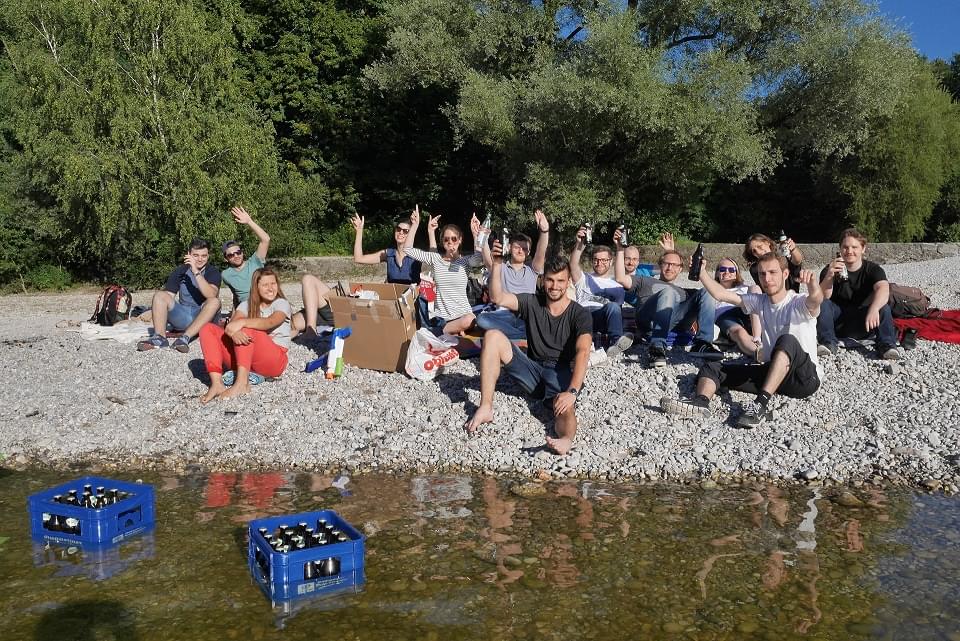 This experience completely changed my thinking and future plan. When I grew up, I imagined being an engineer one day and working for a big company where I earn “good money”. I don’t think like that anymore. First of all the most important thing for me is to work on something I’m absolutely passionate about and I would even do it, if I wouldn’t get paid for it. While it’s nice to earn a good amount of money, it’s not as important as loving what I do. I mean the worst thing I can think of is doing something I don’t like, just to earn money. Such a waste of time. Second, I saw that it’s not impossible to build something from scratch. I realized that we are living during an amazing time. The possibilities are endless. If you have a good idea and you’re not afraid to put the work in, you can build something great.

You might wonder, why I would quit a job which seems to be perfect. The answer is, things changed a little bit. Both in the company and myself. Even though I was working on cutting-edge technologies which I think will change the world dramatically within the next few years (more about that in future posts), I did no longer see the point of my particular work. Yes, the technology was still super interesting and I gained new skills every day, but I wanted to have more meaning in my work and didn’t want to be an employee for the rest of my life. This led me to the conclusion that I have to change something. While thinking about what to do next, traveling around the world was one of my favorite options. I had this dream for a long time but always found reasons which held me back. “I don’t have money”, “I have to finish my studies”, “I have to make a career”, were some of them. I wasn’t yet sure about how I’m gonna travel. I thought about hitchhiking, motorcycling, buying a bus or cycling. I chose the bicycle because it is a good tradeoff between flexibility, cost and seeing things on the way. It took me some more weeks to get from the “I want to do it” to “I’m going to do it” to actually DOING IT. I still remember the day when I woke up and said to myself “Today is the day”. So I set up a meeting with Daniel and explained to him that I’m going to quit my job and travel the world on a bicycle. 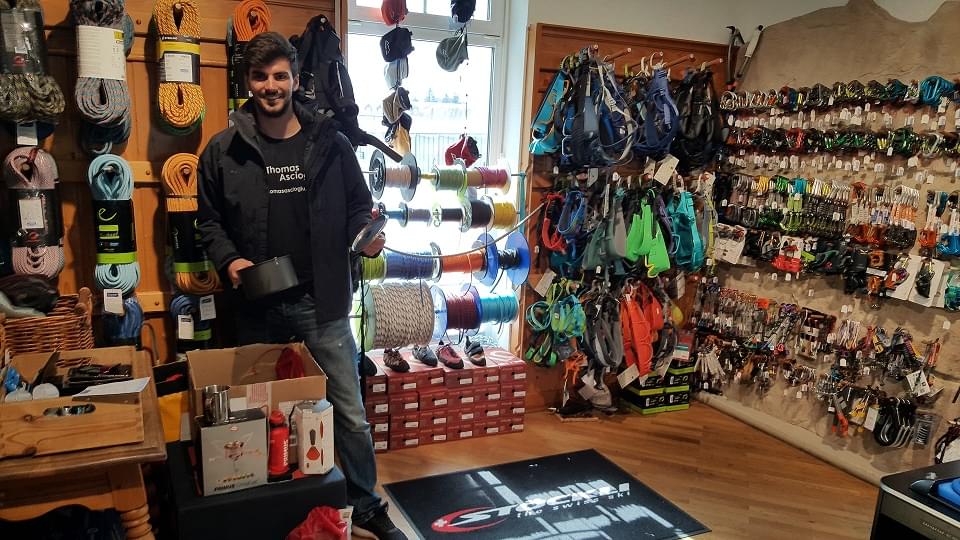 This was about 6 months before the planned start and I kept on working at Innoactive until two weeks before. I didn’t prepare that much during the time. After my last day of work, the real preparation started. In the last days I did farewell parties, sold my stuff, moved out of my flat, got vaccinations, went to tax offices to register as self-employed, bought all the camping, cooking and bicycle gear, bought cameras, created social media accounts, programmed my website, created a personal t-shirt, had interviews with local TV, radio and newspaper. 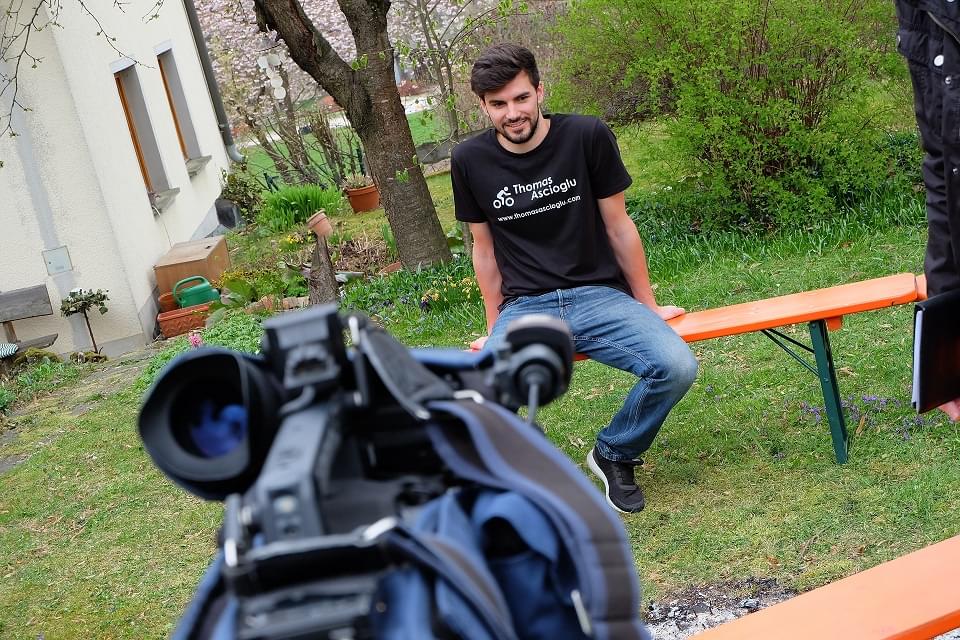 And there was this thing with the bicycle… A week before the start, I began looking for a bicycle. Oh yeah, did I mention that I did not really cycle before?!? So the owner of the first bike shop, who told me “it’s impossible to find that kind of bike in a week”, didn’t sound very promising. But I just thought “challenge accepted”! It turned out to be difficult but not impossible. And as early as the night before the start I had my bike :) Well then there was the thing with packing. I didn’t feel like doing it on my last night and rather decided to keep that for the morning.

In the morning I had to figure out how to put those panniers on my bicycle, or lets say my brother had to. because I was busy creating Vaudi (my bag on the handlebar) and deciding what to take. 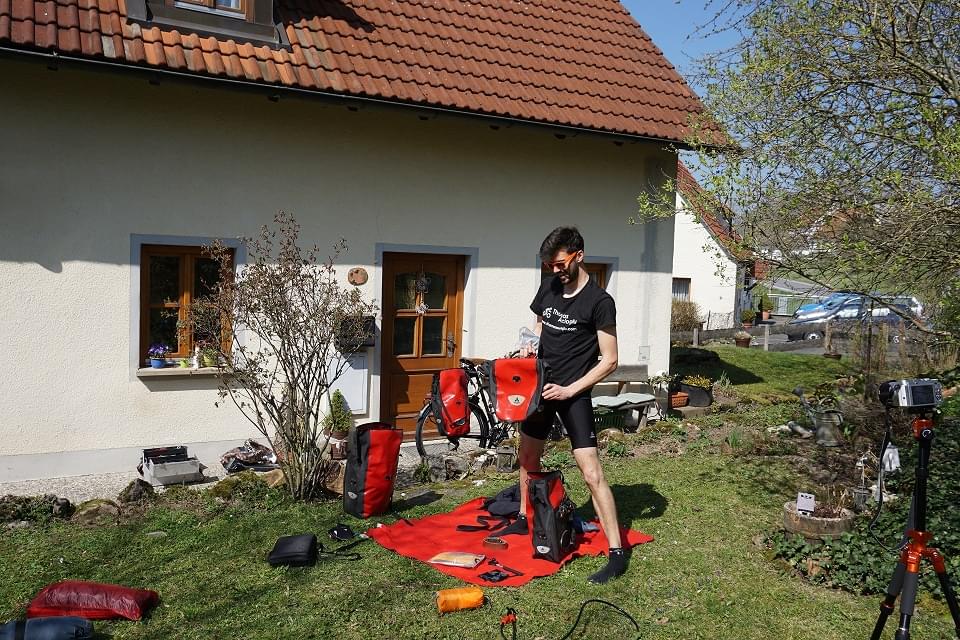 5 underpants 5 pair of socks, some t-shirts, pants, jacket, washbag, camping gear, cameras, laptop, VR glasses (of course) and some survival gear which I was keeping since I was young, in case I will go on a adventure one day, made it into the bags. Friends came over to see me off and some even came with their bicycles to join me on the first kilometers. 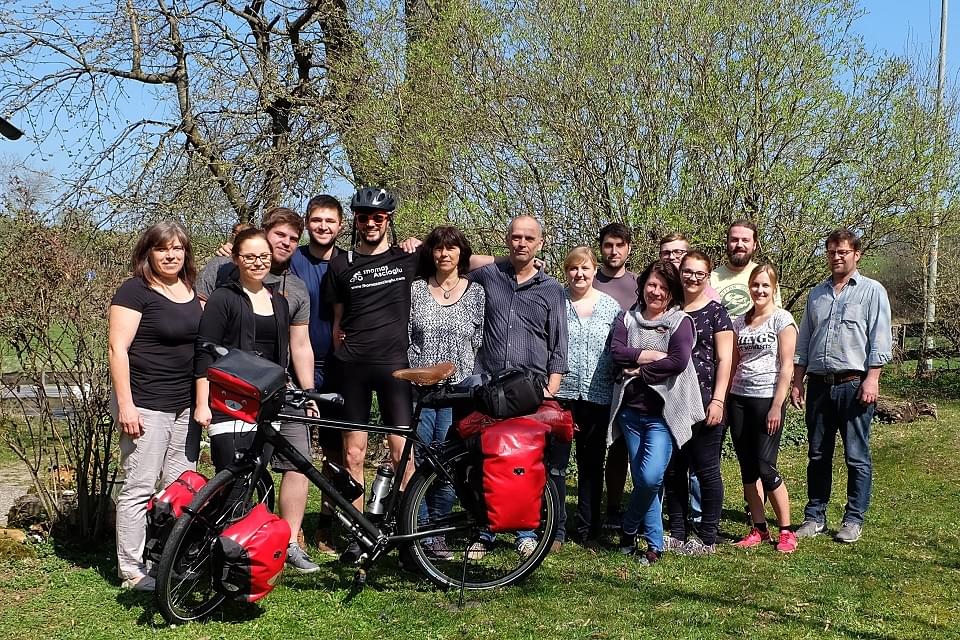 Then it came, the moment I’ve been waiting for. I started pedalling and I was super excited. Well, after 5 meters I lost my tent…